I’ve been trying hard to escape the meth infected apartment of mine, and therefore have been spending lots of time outside, particularly at the empty office at night (yes, I have become one of those people). On Sunday it was raining and thundering, and I was sitting with my wine glass all alone in the empty building, drinking my sorrows away. When the clock struck midnight, I decided to do a Tarot Card reading about a person in my life, who I call “The Stalker”, because he used to well, stalk me 😀 It’s a long, long story , so long that I’m writing a book about it, and it goes all the way back to 2007, where the whole thing started. I don’t know who the stalker is, ‘cause he’s always in the shadow, anonymously watching, but I have a very strong suspicion of who that could be.
Anyhow, I just thought I’d share this for fun, especially ‘cause I’m sure the Stalker is reading this now too…

So yeah, um… Stalker, this one is for u! U can probably recognize yourself in the cards, isn’t it amazing just how accurate this reading is?! I hope one day I will finally catch you red handed, u little bastard, and then you will no longer be an anon! Ha! 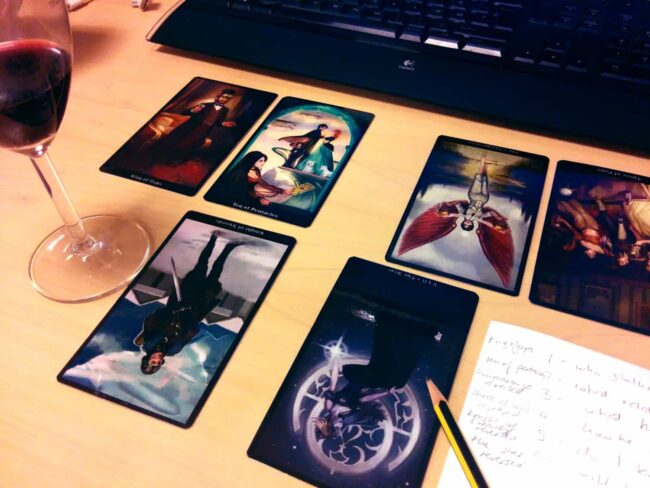 Call him “The Godfather.” The King of Cups is often seen as a person of contradictions. He represents an older male in your life: someone who is calm and composed on the surface, yet passionate and volatile underneath. Although King of Cups is a master of his own feelings, and can control his emotions, he is a person who is not entirely, what he appears to be at a first glance. Under his facetious exterior, the King of Cups hides ulterior motives.
The King of cups is a charmer, a lady’s man, and an entertainer. He enjoys the quiet power he holds over others, and his personal agenda is as well-crafted as his speeches. He has a need to control, which was formed from an early life and his upbringing. He is a seducer who thrives on the company of women, and he is often selfish and unfaithful. There is a battle between his mind and his heart. The two opposing influences pull him in totally different directions, and often he does not know which to follow. As you might expect of such a combination, he is often insecure and indecisive.
The King of Cups possessed some authority and has power in the business world: he is excellent with money and is often associated with secret financial dealings. He could become the captain of a grand ship or a sailing instructor, and you would love him to be your doctor. Also, he also has highly developed psychic ability. As the King of Cups ages, he can become melancholic and nostalgic. He can appear to drift away; his mind gone on trips down memory lane to times, people and places long gone or long changed.

myComment: This King of Cups used to be pretty darn good at taking unauthorized trips to my house at night.. He’s grown somewhat lazy since. I get it. Internet stalking is a lot easier.

Ten of Pentacles represents an old-age strong bond, a tight and close, rock steady unit. The Relationship represented by The Ten of Pentacles Upright is secure. Built to last, its strong foundations have been laid down from the very beginning and are constantly maintained. The Ten of Pentacles also represents loyalty, and institutions, financial and business dealings, and especially old money.
This card reminds us of the wealthy retired father figure who can now finally relax and enjoy his home. He has worked incredibly hard over his lifetime in order to build up wealth, prosperity and security.

Question: What does the stalker want?
Tarot Answer: Temperance Reversed

Temperance Reversed suggests inappropriate behavior or inappropriate action, and looking for instant gratification. Imbalances of all kind are indicated. Temperance Reversed signified recklessness, over-indulging, acting promiscuously, extreme behavior, and actions, as well as addictive behaviors. Living, acting or behaving in an appropriate manner. Acting without thinking of the consequences, the sense of morals and conscience may be called into question. Deep unhappiness.

Question: How does the stalker intend to achieve the goal?
Answer: Three of Cups reversed
Key Words: Spy in The Camp, Enemy Disguised as a Friend, Over-Indulgence, Gossiping, Bitching, Cattiness, Third Person in a Relationship, No Friends, Losing Touch with Friends, Termination, Disharmony, Conflict

Drinking, addictions, and other inappropriate behavior may be an issue when The Three of Cups reversed comes up in a reading. The Three of Cups reversed may reflect isolation from others, losing touch with family and friends, as well as destructive behavior. Cattiness may abound or there may be an enemy disguised as a friend. You are possibly being very naive about those who appear close to you. Can you trust your friends?

myComment: Spy in the camp awakes memories of a spy in the bushes 😀

Knight of Swords, that astrologically represents air and sign of Gemini, also represents a man that can be shallow and insincere. His fiery temperament can have him blowing the smallest thing out of all proportion, resulting in temper outbursts and tantrums. He can become nasty and bitter and quite a dangerous enemy. In relationships, he is intimidating, insensitive and often aggressive.  He uses threats and mind games to control his partner and is great at off loading any responsibility for his part in the situation with his fancy and complex use of words.  He will be critical of his partner’s appearance, attitude or behavior. He will always have the last say in an argument and never apologizes as his overbearing arrogance makes him feel superior. In his most negative aspect, he can use his Sword to inflict physical pain along with his insulting and demeaning words. He demands obedience and compliance at all times. Impatient, impulsive, he may well be the reckless young driver or ‘Boy Racer’ showing off to his friends as he endangers all their lives. This volatile Knight travelling at such speed while brandishing his Sword can result in violence, accidents and injuries. The Knight of Swords is likely to be very disorganized, flippant and unpredictable. If you encounter this type of person, you need to be very wary!
On the other hand speed may have caused this Knight to make a mistake and he may have fallen from his horse. He now has plenty of time to think of the damage he has done as his horse bolts off into the distance leaving him alone with just his thoughts as he runs out of steam. If he has fallen from his horse, then he may have landed on his own sword causing him to understand the pain he has inflicted on others with it. 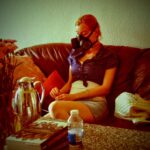 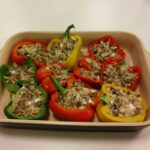